On the eve of the boom that began the city of Everett, a Seattle photographer traveled by sternwheeler to the townsite on Port Gardner Bay, toting his tripod, view camera and a heavy parcel of unexposed glass plates.

The month was October, the year 1891, and the man behind the camera was dapper, mustachioed Frank La Roche. His job: fulfilling a commission for the management of the Puget Sound Wire Nail and Steel Company, one of the industries which was to line the perimeters of Henry Hewitt’s “City of Smokestacks.”

La Roche arrived by steamer to discover a bleak peninsula stripped of much of its timber and shrouded in the smoke of burning stumps. The city-to-be was in fact two small settlements on opposite sides of the site. The east side community was clustered at the intersection of Pacific Avenue and Chestnut Street. There one found the little office of the Brown Engineering Company, a firm busy laying out streets and surveying new additions to be platted. 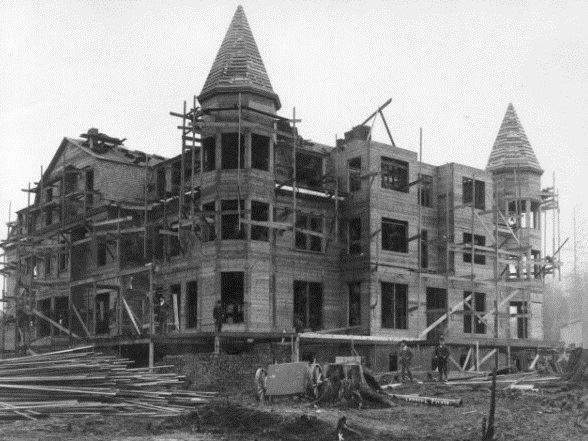 Nearby was Boughton Aldrich’s Workingmen’s Grocery and the tent hotel of W. A. Tegtmeier. A little further north on Chestnut stood the Everett Meat Market run by Jack Bone, who later became Everett’s first fire chief. A tent next door to Bone housed Saner’s Barber Shop, where one could drop off clothes to be shipped to Snohomish for laundering.

Steamers docked at the foot of Pacific under somewhat makeshift circumstances until Swalwell’s Dock at the foot of Hewitt was finished in January of 1892. On the bayfront the nailworks was under construction. At the west end of ungraded Hewitt Avenue was the original residence of the Rucker family, a two-story white frame building. A little south of there was a building known as Miley and Henderson’s store, which doubled as the local post office.

The Seattle-Montana Railroad line was nearing completion. The section along the Everett bayfront was already finished and passenger runs began less than two months after LaRoche took his series of photos for the nail company.

In addition to his cumbersome picture-taking gear, La Roche brought impressive skills and reputation with him to Everett. Born in Pennsylvania in 1853, he began his photographic career in a Philadelphia studio at 17. Two years later he was operating his own shop, and at 21 he gained nationwide publicity by making the longest time exposure that had yet been done—a picture of an ancient church in St. Augustine, Florida. He opened the lens at ten in the morning and closed it 30 hours later, on the afternoon of the following day.

In 1878, the U. S. government commissioned him to make a difficult series of telescopic shots of the transit of the planet Mercury, an unprecedented feat that was a minor milestone in the field of photographic astronomy.

Eleven years and innumerable awards later, he arrived in Seattle. It was late summer and a disastrous fire had just destroyed much of the city. As Seattle rebuilt, LaRoche established one of the finest photographic studios in the Northwest, a base from which he embarked on hundreds of picture-taking expeditions.

La Roche made at least three more trips to Everett during the year that followed his first photo series of the area, sandwiching the visits between excursions to Alaska, where he was laying the groundwork for a project that promised to outshine the Mercury photos and the St. Augustine time exposure in lasting importance. Between 1890 and 1902 he made over 100 round-trips to the Klondike and the 3,000 pictures he took there were acclaimed during his lifetime as an unsurpassed chronicle of the Alaskan Gold Rush.

An active professional photographer until he was 73, La Roche remained busy and vital until he suffered a sudden, fatal heart attack at 84. The fate of his Gold Rush collection is unknown, but it appears to have been lost sometime after his death. The University of Washington Special Collections department has much of La Roche’s work on their website.